Turing machine programs are sometimes represented as directed graphs. The vertices of the graph are the program’s states and the edges are transitions between states. The program’s print and shift instructions are relegated to being labels for the edges. Here’s an example: 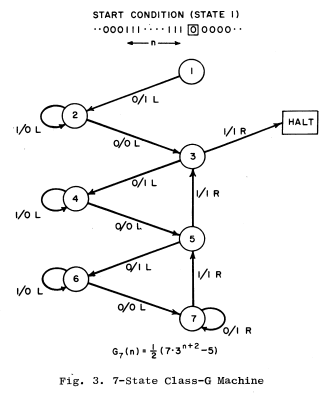 Suppose you have a Turing machine diagram, but you don’t have access to the print and shift instructions. All you have is the graph of the states and their transitions. I don’t know why you don’t have the prints and shifts, but you don’t. Maybe you’re looking at the diagram on an overhead projection and you forgot your glasses. Maybe the diagram was drawn on a whiteboard and somebody walked past and bumped into it and wiped away the instructions. Maybe you had the program on a deck of punch cards but you dropped them and the cards got out of order and now all you can recover are the state transitions. Way to go, you klutz. Try a rubber band next time.

What can you tell about a program given only its state transitions? Certainly it isn’t possible to figure out exactly what the progam does. There’s no way to tell how the machine will interact with the tape. But the program’s logical structure can be discerned. Look at the example above. States 1 and 2 do some kind of initialization for state 3. States 3, 4 and 5 form a loop. States 5, 6 and 7 form another loop. The 3-4-5 can, based on a decision made at state 5, extend to include 5-6-7 loop.

Busy Beaver programs have state transition graphs too. What do you think they would look like in general? What kinds of properties would you expect a Busy Beaver graph to have?

As far as I know, this question was first posed by Joshua Zelinsky in a blog comment. It seems like an obvious question when you hear it, but I haven’t seen any evidence that anyone had ever thought much about Busy Beaver graphs before that. James Harland pointed out that Busy Beaver graphs can’t be disconnected (that is, that there can’t be two nodes between which there is no undirected path), but didn’t go any further. Ludewig, Schult, and Wankmüller compiled an appendix of 100 long-running 5-state programs, each accompanied by a hand-drawn state transition diagram. Look at these nice graphs:

They went to all the trouble of drawing all those diagrams, but their report doesn’t mention the graphs at all. Why not?1

A related intuition, though harder to formalize, is that Busy Beavers shouldn’t be “cleanly factorizable” into main routines and subroutines – but rather, that the way to maximize runtime should be via “spaghetti code,” or a single n-state amorphous mass.

Believe it or not, a lot of code that is written by professional programmers is spaghetti. Shocking, I know, but true. Spaghetti code is often not created intentionally. It can result from carelessness, or even a lack of taste. Here are two ways of setting a variable to some conditionally chosen value:

The ternary expression is obviously the better choice here. It has a simpler control flow. One assign statement, one path. The if-else block has two assign statements, each executed on a separate path. It’s spaghetti-er than the ternary. It’s also much more common. Is that a coincidence? A general lack of taste would explain the correlation. It could explain some other things too.

Anyway, on to the application of the Spaghetti Code Conjecture. A program can be converted to a state transition graph by ignoring its print and shift instructions and considering only the states. Now go the other direction. Given an n-state k-color state transition graph, how many concrete programs correspond to it? In other words, how many ways are there to decorate the graph with print and shift instructions? There are nk transitions. Ignoring normalization, each transition gets a left or right shift and one of the k colors. That makes 2k decorations per transition, and so 2nk2 programs per graph. Is that right? I hope so. That means 40 programs per graph in the ❺② case, and 54 programs per graph in the ❸③ case.

This fact can be applied to Busy Beaver searching. The naive search method generates all n-state k-color programs and then searches them. But the total number of programs gets out of hand fast, growing on the order of O((nk)nk). A better way to do it is to generate the possible graphs first and then decorate them with instructions. The Spaghetti Code Conjecture can then be used at graph-generation time to discard graphs that seem unsuitable. (How many program graphs are strongly connected? I have no idea. That’s a sophisticated calculation, and I don’t know what I’m doing.) Discarding a few graphs means discarding a whole swath of programs. It can’t be overemphasized how many programs there are. Discarding them is like bailing water out of a ship. There is no choice but to get rid of a lot of them, and as quickly as possible.

This isn’t just idle speculation. I used the graph decoration technique along with Zelinsky’s strongly connected graph conjecture to find the reigning ❹② Beeping Busy Beaver champion. The conjecture has predictive power! So as far as I’m concerned, its value has already been proved.

Wait, did somebody say “proved”? Like, the conjecture has been formally proved? No, of course not. I doubt it can be proved at all. It might even be provably unprovable. But it could nevertheless be true. Busy Beaver searchers are interested in establishing lower bounds, not upper bounds. If a conjecture leads to better lower bounds, that’s good enough.

How much wood would a woodchuck chuck? Would a beaver eat spaghetti? Raccoons sure do love rummaging through my trash, I can tell you that.

Here’s an argument that the strongly connected graph conjecture is true. It’s not a real proof, just a suggestive argument. Argument by induction on the number states, with fixed k colors. 0- or 1-state programs are trivial and/or degenerate, so start with the base case of 2 states, A and B. Busy Beaver programs run on the blank tape, so the program starts in transition A0. If it stays in state A, then it will remain on transition A0 forever, and is therefore junk. So A0 must transition to B. Does B have any connections to A? If it doesn’t, then the program will spend the rest of its execution time in its k B transitions, and won’t be able to use the full 2k transitions available. But surely such a program can’t be the ❷ⓚ Busy Beaver. Kinda QED on the base case. Next, the induction step. The n-state Busy Beaver is strongly connected. What about the n+1-state Busy Beaver? Suppose it isn’t strongly connected. For simplicity, suppose also that n+1 is the least number of states for a Busy Beaver program whose state graph is not strongly connected. Every Busy Beaver program through n states is strongly connected spaghetti, but then some kind of structure gets introduced at n+1? Why? What kind of structure? Why n+1, and not earlier or later? It seems unlikely. The inductive step is kinda done, and that takes care of the loosey-goosey informal argument.

So we think that Busy Beaver program graphs should be strongly connected. What other properties should they have? I’m now going to enter into the territory of rank speculation and propose a few properties that seem like they should hold. Some caveats:

With that, here are some ideas about how an n-state k-color Busy Beaver program graph should look.

What is the temptation of the Busy Beaver Problem? The mathematicians have taught us that the general Busy Beaver function is non computable. Different from simple mathematical truths, this result pleases our brain, but not our heart (at least not mine). And though we know we cannot win the war against the mathematical law, we would like to win a battle, i.e. to find at least one particular Busy Beaver.