SCENARIO: An Emacs user gets up and leaves the room, leaving their Emacs instance running and unattended. As a prank, you decide to overwrite the built-in if operator with another operator that is just like if except that it occansionally swaps its then- and else-clauses. How can this be done? Here are three challenges, in ascending order of difficulty, related to this flaky if.

Implement flaky-if, which is just like if except that, say, 1% of the time it swaps its then- and else- clauses.

As a test, the following expression should evaluate to around 101:

NOTE: This will not fulfill the goal of the prank, but it’s a good warmup for Challenge #2.

Make the built-in if operator act the same way as flaky-if from Challenge #1 without screwing up the running Emacs instance.

As before, the following should evaluate to around 10:

WARNING: Take heed of the italicized qualification. You can really jack up an Emacs session if you get this wrong, and that will quickly alert the mark that their computer has been tampered with.

After Challenge #2, the built-in if operator is overwritten with the flaky version. Find some Elisp code which, when evaluated under the regime of the flaky if, behaves strangely but without being completely busted.

NOTE: “Completely busted” includes throwing a stack overflow error, or slowing to a crawl, or anything like that. Something should happen, and it should somewhat resemble the code’s intended behavior. This is an open-ended challenge. Feel free to change the 1% flip-rate to something like one-in-a-million.

First, some review. The signature of the if operator is (if test then &rest else), and it is evaluated as follows. First the test expression is evaluated. If it comes out to non-nil, then then is evaluated and returned; otherwise, the zero or more else expressions are evaluated in sequence with the last one being returned if there is one or nil otherwise.

With normal function calls, each argument is evaluated exactly once at call-time. if doesn’t work like that, and so neither will flaky-if. The standard Lisp facility for defining function with different evaluation patterns is defmacro:

defmacro defines a new function that acts as a compiler directive. Rather than receiving evaluated arguments, it receives its arguments unevaluated; that is, it receives Lisp code as arguments. The typical output of a macro is another Lisp expression which will itself get evaluted later. The macro function will contain logic to shuffle around its initial arguments, possibly evaluating any of them.

One way to define flaky-if would be to shuffle around the then and else blocks inside some if expression. But observe that the same effect could be achieved simply by negating the test expression. A function can be chosen at compile time to be attached to test; 1% of the time it will be a negating function, and the other 99% of the time it will be a function that does nothing.

The final result of the macro needs to be a Lisp expression, so all that remains is to plug in the pieces:

And that’s a solution to Challenge #1.

Challenge #2 is trickier. flaky-if relies on the builtin if, but if the goal is to redefine if, then that won’t be possible. (Or will it? Try it and see what happens.)

The thing that if is needs to be saved somewhere for use in the new if macro that will be defined. There are a lot of ways that you might think to do this, and most of them are wrong. One way that seems to work, and I don’t exactly understand how, is to take the function-value of the symbol if and store it in the function slot of some other symbol, say old-if. Then the new if macro can rely on old-if, which does the same thing as the builtin if, and the macro will otherwise look like the definition of flaky-if.

For Challenge #3, I changed the random call in the if macro to (random 1000000) and then evaluated the file tetris.el. This resulted in something that looks like Tetris, but with some unusual collision detection: 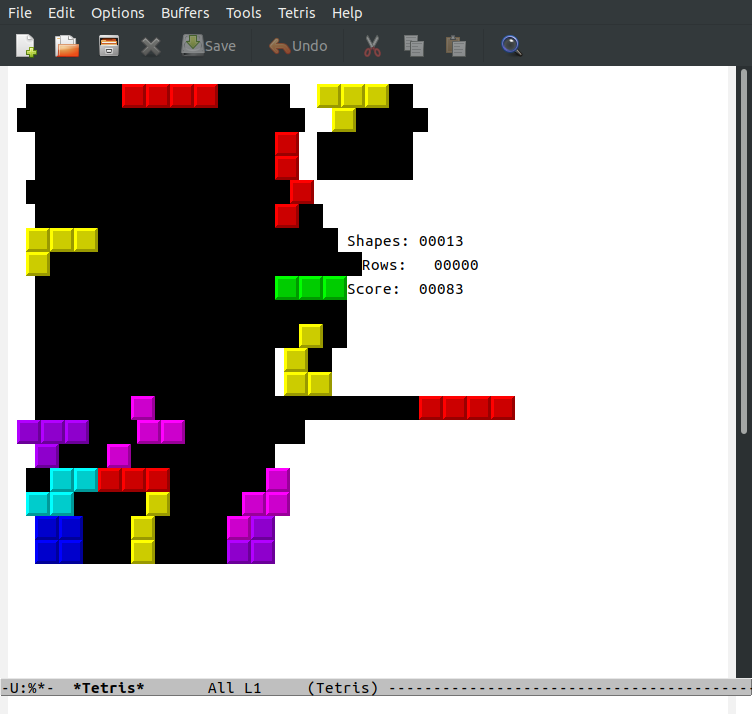 Eva Lu Ator disagrees, saying that the two definitions are equivalent, and that Alyssa’s solution is actually a little slower. Who is right?

What does his version of flaky-if do?

The flaky if challenge was initially posed by Joe “begriffs” Nelson. The setf line in the solution to Challenge #2 was developed by Erik Anderson. Christopher “skeeto” Wellons raised some issues concerning byte-compilation.

2 As a quick check of understanding, evaluate the following expression:

3 I can’t seem to get the number of this list right, but I don’t feel like delaying this post to fix it. It has something to do with the Org code blocks.